MyoBlaster generates music from the cDNA sequence of myoblasts.

Myoblasts are undifferentiated cells primed to generate Myosin, a type of protein that is specific to muscle cells.

Meat is mostly muscle. So myoblasts play a major role in the creation of all meat.

It is possible to extract myoblasts from a living animal, and place them in a context where it will continue generating muscle cells outside of the body. That context might require a serum defined by the International Serum Industry Association. It’ll come with a guarantee of traceability inspired by the farm-to-table movement.

Scientists, artists and entrepreneurs alike are experimenting with this technology. Out of the field of regenerative tissue came the potential for generating meat in vitro. The idea is inspiring, but more research and funding will be necessary before it can be put to the test at high end grocery stores.

A new process for Engineering Comestible Meat was patented last year by the company who is closest to bringing Cultured Meat to market. The patent describes processes for 3d bioprinting and weaving in fat, blood vessels, and connective tissues to more closely simulate the look, taste and mouthfeel of real meat. The patent states: “In various embodiments, the multicellular bodies, layers comprising multicellular bodies, and engineered meat products comprise non- human cells derived from, by way of non-limiting examples, mammals, birds, reptiles, fish, crustaceans, mo Husks, cephalopods, insects, non-arthropod invertebrates, and combinations thereof.” I have included some, but not all, of these potential non-human cell sources in the Myoblaster application.

I found gene sequences at ensembl.org, a project of the European Bioinformatics Institute.

I decided to sonify the cDNA. The cDNA is complementary DNA. It takes all of the things that DNA does, and boils it down to just the instructions for making a piece of protein. The instructions, or Genetic Code, are a sequence composed entirely of just four nucleotides: adenine (A), cytosine (C), guanine (G) and thymine (T). The sequence is divided into subsets of three nucleotides, or “codons,” each of which codes for one amino acid. There are 23 possible amino acids, and complex proteins—like myosin muscle/meat—can be boiled down to a sequence of amino acids which can be boiled down to a sequence of just four letters.

In the meantime, you can play with these sequences on the Myoblaster.

END_OF_DOCUMENT_TOKEN_TO_BE_REPLACED

Dinosaur Flesh is Back (From Extinction)

Symbolic Hamburger (Death is Above You)

END_OF_DOCUMENT_TOKEN_TO_BE_REPLACED

Here are two draft songs I’ve been working on for the collection of Meat Chips. One is sort of a pop song with vocals, and one is an instrumental that samples the sound of meat (chewing, frying, cutting, pounding, grinding).

I’m figuring out the voice of this collection.The music is about a new industry of synthetic meat. So it should be industrial (sound of technology/machinery) and synthetic (synthesized sounds). On the other hand, I’m interested in how the meat will be marketed, so maybe there is room for jingles.

Symbolic Hamburger (Death Is Above You)

John, Karam and I met up a couple times this week, and I think we’ve narrowed in on an idea.

We’re interested in exploring the “open source / closed source” axis for a future of meat that could involve 3d bio-printing. We want to highlight the contrast between this technology’s rhetoric (potential to feed the entire world!), vs. the realities of our capitalist food system.

Now we are leaning more towards making a marketing pamphlet for a product called the Carnoisser.

The Carnoisser will be sort of like a hybrid between a Maker Bot and a Keurig. John pointed out how Keurig, the coffee pod pioneer, has taken measures to discourage DIY pods and promote only the use of licensed Keurig pods.

This weekend, I tagged along on a guided tour of New Lab and the Brooklyn Navy Yards, courtesy of Mitchell Joachim of Terreform ONE. Mitchell is an ecological architect who uses biomaterials to promote sustainable design. I had hoped to talk about his projects like the in vitro meat habitat (pictured below) but wound up hopping on a tour that he was giving his class of architecture students from RPI.

BIodegradable chair for kids, made of mushrooms and cellulose

Bottom Right: prototype for a Post Carbon City made with Phytoplankton

Our group has narrowed down an idea of what we’d like to make, and we need more information about what the future might hold for 3D Bio Printing.

Dinosaur Flesh is Back (x3)
from extinction

We couldn’t salvage their pea-sized minds
or their reptilian hearts.
But now that we can clone dinosaur flesh
at least that is a start

To all the friends at my birthday party
chompin down on t-rex nugs
How cool is it that this is dinosaur flesh?
Give your mom and daddy hugs

To all the friends at my birthday party
chompin down on t-rex nugs
How cool is it that this is dinosaur flesh?
Back from the Cretaceous

Call: The Future of Food Expo is a showcase of the most innovating tastes and ideas in food. From new technology and startups to food nonprofits, B2B and media organizations, the booths will provide an interactive peak into the future of food. The expo is free and open to the public. It will be held in Williamsburg, Brooklyn, in conjunction with the Taste Talks festival. Taste Talks showcases the culinary cutting edge for a food-obsessed generation through symposiums, workshops and discussions. 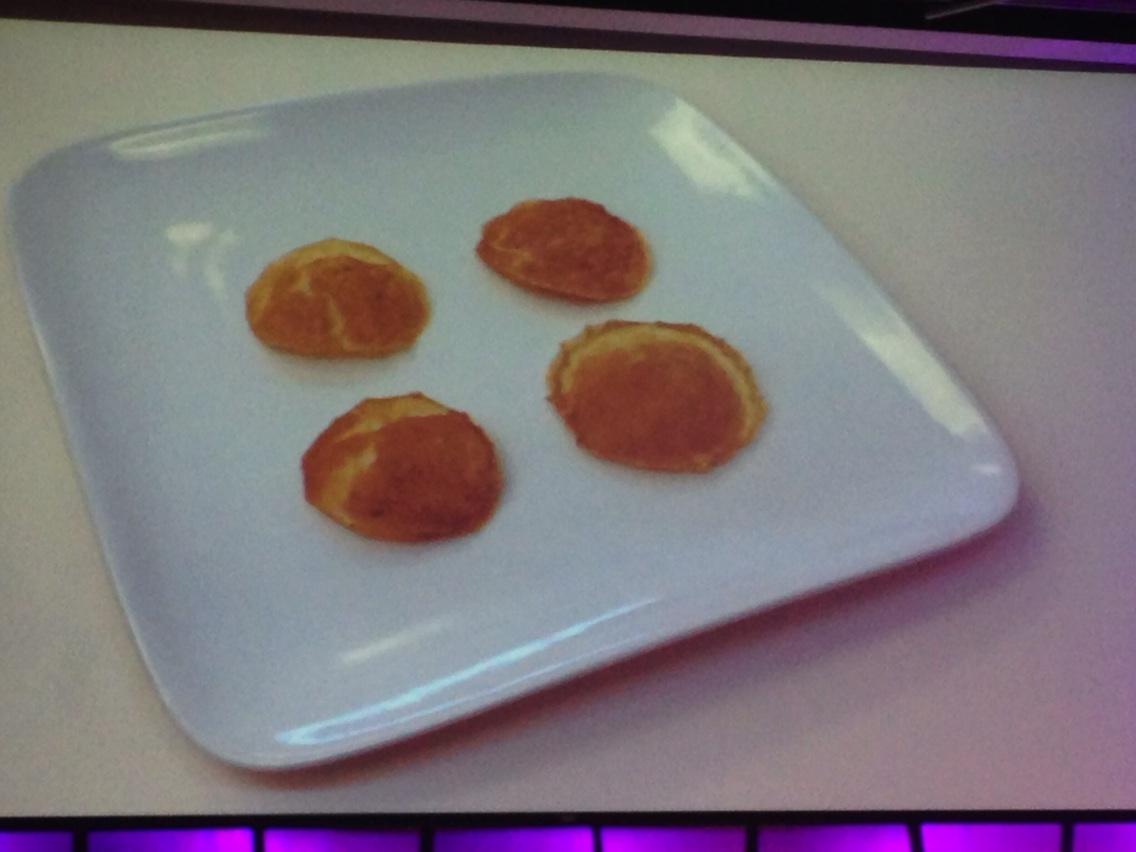 Nine years in the future:
“Would anyone like a meat loaf?”
“Sure I’d like a meat loaf”
“and what kind of meat would you like in it?
Your options are poultry, bovine or mariscos”
“Hey I’ll try the poultry”
“Excellent choice.”
“Synthetic?”
“Of course!”

Cell differentiation
to mammalian muscle
Guided by the medium
or “growth factor”
or “nutrient broth”
wash, compress and texture
flavor, color, sterilize
before it’s thawed and eaten…
what do you call muscle
that never once flexed?

Is it Karshrut if no beast is slaughtered?
But not completely animal-free
Cultured meat could it be some body?
A new delivery system for protein

To neo luddite with a pork fascination
Your small batch ain’t gonna do this time
How many pigs to feed eight and a half billion people?
The answer’s one. Sausage links!

I am going to become an expert on In Vitro Meat. I picked this topic out of a hat.

I went to the Future of Food Expo on Saturday with a mission: to talk to people about In Vitro Meat. Something that Nancy Nowacek mentioned really resonated with me: She said she doesn’t like cocktail parties for shallow small talk, but when she has a topic she is interested in, and other people might have the answer, then she gets into the conversations and is driven to go to these types of events. That’s exactly how I felt about the Future of Food Expo: normally, I would not really be that interested in going to an expo. But now that I have In Vitro Meat, I have a purpose.

There was not any in vitro meat at the expo, but there were a few interesting ideas about meat and the future of food in general.

I met people from The Future Market. The Future Market asks “What could a grocery store and its products look like in the year 2065?”. They had an architect/design rendering of the space. They had a newspaper, The Studio Sentinal, published on Sept 13-14 2065 with headlines like Gross Domestic Happinnes At All Time High Since 2043. And they had samples of a product that were packaged like Wheat Thins, but made with different types of grains in a process they wanted to advocate called Crop Rotation that embraces the diversity of crops rather than homogenizing them into Regular Wheat Thins. It’s a project that verges on critical design, a “food design and innovation agency” called Studio Industries. “We are a group of food innovators, designers, scientists, marketers and entrepreneurs passionate about steering the world toward a better – food future.” Interestingly, like Anthony Dunne and Fiona Raby, they do not describe their work as “art.”

The Future Market said they are intrigued by In Vitro Meat as a way to re-imagine what protein is. They suggested I check out Food Tech Connect magazine, and Beyond Meat in California. They also suggested checking out Hampton Creek Foods and their product Just Mayo, because they work with a plant-like egg powder called Beyond Eggs rather than real eggs. Keywords are Health, Taste, Sustainability for the world and Accessibility: “good food should be accessible to everyone.” But what is “good?” I told Emily from the Future Market that I was conducting research for an art/design class, and she also recommended I check out the textile butchery work of Aufschnitt Berlin, who create stuffed sausages out of fabric and cloth, exhibited at the Paris 2014 Maison & Objet furniture and interior design festival. I found a link here and will dig in more soon.

In general, the Future Market is against processed foods like soy, and against trying to emulate meat, but think that new types of foods shoudl instead be used to re-imagine what food can be, especially with something like meat which to them, in the end, is just protein/nutritional value.

The farmtopeople.com booth caught my eye because they had snack bars made out of real meat. The meat was all grass fed, organic, raised by small farms. They also had snack bars made out of crickets, because crickets have good protein/nutritional value. These foods are available on their website. I asked Mike from Farm To People if the website he helped found would carry in vitro meat bars. He seems opposed to the idea, because it’s not really meat, and it isn’t produced by farms. He told me that when you eat one of these snack bars from a 100% grass fed cow, you can taste and feel the difference psychologically. With in vitro meat, it’s not a living being, and it just won’t be the same. Admittedly he was not very up on the latest trends in in vitro meat (and neither am I yet) but he was intrigued by the sustainability factor, even if it doesn’t make sense for his website which is about Food • Lifestyle • Gifts and “small-batch handcrafted goods”. END_OF_DOCUMENT_TOKEN_TO_BE_REPLACED